** This is part 3 of a 3 part series. You can read the first part HERE or the second part HERE ** 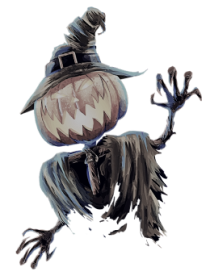 Under the cover of fog she moved through the streets of the town. She knew what she must do, find her brethren. A queen needs her army. With them by her side the townsfolk would run screaming, providing a banquet of fear for them to feast upon.

She stayed clear of the porch lights glowing their white rings in the fog, keeping to the dark as she looked for other pumpkins. She knew those others from her patch were enchanted, just like her. She had felt them as she grew. She heard their whispers, and whispered back to them. They were meant to serve her.

So far she'd had no luck in finding any of them. She moved among the bushes and the darkened yards, looking. She came to a house with no lights on, but its porch had several sets of glowing eyes glimmering through the fog. She moved as quietly as she could, cringing with each creak of her knees, until she had climbed the steps of the porch. She bent down to look into the eyes that flickered with candlelight. Here were three of her brothers, two on chairs and one on the floor. They did not move, or speak. Nor did they have bodies to rise up with. She looked at them intently, her eyes widening. She grasped one of the pumpkins by its cut vine, and the entire top of its head came off when she lifted! What had they done?

Her mouth hung open as she gazed down through the hole in the top of the pumpkin. They had cut it open, butchered it, scooped out its living essence and placed a candle inside! No, this cannot be!

She stumbled down the steps and staggered-ran across the yard toward one of the houses with a light on. Here was another, two more! Same as before, her brothers and sisters were cut open, emptied, and had crude faces carved into their shells. She rushed on toward another light, another house. More pumpkins, more of the same.

At one house an old woman opened the door to find the Pumpkin Queen on her porch, cradling a pumpkin whose shell had been carved with the image of a frightened cat. “You're too old for trick-or-treating!” the woman hollered, banging her cane on the wooden porch. The Queen skulked away.

She reached the edge of a lawn bordered in scalloped bricks. In the entryway was another of her butchered siblings, it's face carved into a comical grimace. She looked up at the moon, black tears streaking her contorted face, and fell to her knees in the grass. “Nooo,” she cried. “You monsters!”

The Pumpkin Queen cried into her hands. She had lost. The humans had destroyed her army, beaten her before she had even begun. She had nothing left, no power worth anything. She couldn't even scare a child.

Then she heard a strange sound, a short musical beat that repeated itself. She looked toward the sound and could just make out the shape of a woman in the fog holding a glowing object. The woman touched the object and held it to her ear.

“Hello?” The woman spoke clearly, even though nobody else was nearby. “Yeah, this is Jacqi.”

The Queen listened, her eyes arching downward as an idea bubbled into her head. One last chance. She began to move toward the woman, hoping the distraction of her device would provide ample cover.

“Oh hi, Mel. What happened to your phone? I didn't even recognize the number,” the woman continued, unaware of what was noisily creeping up behind her. She swept her straight black hair out of her eyes, tucking it behind her ear. “No, I'm out trick-or-treating with the kids.”

The Queen stopped. Kids? She looked around and saw them, two young children, maybe four and six years of age, up on the porch with her dead pumpkin sister, the old lady cooing over them and dropping candy into their pumpkin shaped buckets. Pumpkin shaped candy buckets. That made her even more determined.

“I don't know when we'll be done,” the woman who called herself Jacqi said. “Whatever, I'll see you tomorrow. Bye.” She took the device away from her ear and began touching the glowing screen. It made a sound like someone talking, then laughter, then more talking. The Queen crept forward.

She was several inches taller, and seemed to tower over Jacqi when she stepped behind her. She quickly brought her arms around the woman, pulling her back in a painful embrace. The vines of her arms and legs wrapped Jacqi in a tight cocoon while another went around her mouth, muffling her cries.

Jacqi dropped her phone in the grass and tried to put up a fight, but her skin was already being punctured by multiple thorns. She squirmed as she was enveloped by vines, which seemed to be dripping a living poison into her blood. A voice entered her mind, speaking in a rush of words and symbols. It spoke of hunger, and destiny, fear and more hunger. It felt evil, yet soothing. It's intent was malice, but it called her sister. In the end, Jacqi stopped fighting.

The vines encircling her withered, crumbled and fell away. The pumpkin head collapsed inward on itself and turned to dust. Jacqi brushed the dust off her shirt and her arms. The puncture wounds had completely closed, leaving no trace. She stooped and picked her phone up from the grass. She felt better already. Stronger. She tucked the phone into her pocket.

“Hey Mommy,” the boy said as he came up to her, holding his little sister's hand, “that old woman wouldn't stop talking.” Jacqi smiled down at Trenton, her son and her daughter, Leesha.

“And her breath was stinky!” Leesha piped up with a little frown.

“That's ok,” Jacqi said as she took their hands in hers, “we'll have lots more fun at the next house.”

“Mommy, what happened to your hair?” Trenton asked, looking up at his mom. Her hair had pulled up into tight curls with little white streaks in them.

“Oh,” she answered, letting go of his hand to bounce the curls, “I don't know. Just felt like trying something different.”

“I like it,” he said, putting his hand back in hers. He was too young to be concerned with the speed of her hairstyle change. Jacqi licked her lips, then smiled as she led the kids down the block.

“Let's try this,” the corners of her mouth turned upward in a sly grin. “Instead of saying 'Trick or Treat', let's say 'Trick and Treat.' Got it?”

The two kids nodded and headed up the path toward the door. As they eagerly rang the doorbell Jacqi stepped behind them. A smiling woman in her late thirties, wearing a flowing, shredded black dress and a witch's hat as a costume, opened the door and clasped her hands together while looking down at the kids. Trenton was sporting his favorite wolf-man outfit, while Leesha wore a simple white dress and a wig of long black hair that hung over her face.

“Aren't you just the spookiest little things!” she exclaimed.

“Oh no, dears,” the woman said with a slight frown, “it's 'Trick or Treat', not 'and.'” She held out an orange and black bucket filled with candy. “Take just one each now...” As she bent forward she glanced up to smile at the kids' mom, but stopped short, shock spreading across her face, her limbs suddenly too stiff to move.

Jacqi didn't look much like herself at that moment. There was an eerie glow enveloping her, darkening her like a silhouette. A brighter glow emanated from her eyes, which were no longer their pretty shade of green, but a bright orange that flickered as if lit from behind by a flame. From her shoulders and back grew a series of quivering legs curved inward, shaped like the claw tipped tarsals of a giant spider, ready to draw its victim into its fanged mouth. Jacqi's lips split into a flame filled grin, ringed with sharp, glistening teeth. The grin was much too wide for her face. She held a hand to her cheek, drumming the fingers on her cheekbone, her nails growing into wickedly curved talons while she drummed. Leaning over the heads of the kids, she pointed one of those talons toward the woman, a low chuckle whispering through the flames growing hotter within her mouth.

“All! Take ALL OF IT!” The woman quickly dumped the entire bucket into the two pumpkin buckets the children held out. A few pieces of candy missed and fell onto the porch. The woman did not blink, did not dare to. Her wide gaze never left Jacqi's visage.

“Whoa,” the kids said in unison, staring into their overflowing containers.

“Now this,” Jacqi said, breathing in deeply of the woman's chittering fear, “this is Halloween.”

The woman's knees gave up and she fell back onto her butt. She held a hand to her chest, her heart hammering wildly. She skittered backward on her hands, then clawed at the door before slamming it closed, jarring the kids. They stared at the door for a moment in confusion.

“Wow Mom,” Trenton said as he and his sister turned, “look at all the candy we got!”

“I know, you made a real killing,” Jacqi said, twirling a finger around one of her new curls, looking every bit their mom again. She steered them toward the street, toward the rest of the town and the long night ahead. She knelt between the two kids, a hand on each of their shoulders. “How about we go have some real fun? After all,” she smiled, “this is Halloween.”

Happy Halloween!
There you go, all three parts wrapped up with a nice little bow. Will Jacqi return somewhere down the road? Well, there are always possibilities. (probably)
Oh, and in case I didn't make it clear enough, Jacqi feeds on fear. So just don't be afraid this Halloween, and you've nothing to be afraid of... right?
I hope you enjoyed this little adventure. I'm not sure what will come next, but I'm sure it will be... something.
*This is Halloween (part 1)*
*This is Halloween (part 2)*