This is part 2 of a continuation from This is Halloween. You can read part 1 Here.

Johnny awoke with a start. The room was dark, all gray with shadow, and the house was silent. The TV was off. When had he turned off the TV? Oh yeah, crap, he remembered now, he'd turned it off because Jacqi and the kids would be coming home soon. He must have fallen asleep right after hitting the button on the remote.

He sat up on the couch, a couple of beer cans tinkling next to him. He needed to get rid of those, and hide the rest of the candy before Jacqi came back, otherwise he'd have to listen to her bitch about it for hours. She was good at that. Bitching. For the most part she was just what he liked in a woman, petite, pretty, and a wildcat in the bedroom, but when he did something she didn't like there was a price to pay, and she made damned sure he paid it. Best she didn't know how he'd skipped the trick-or-treaters and instead had watched a game.

He had just plucked the cans from the couch when he heard a scraping sound. 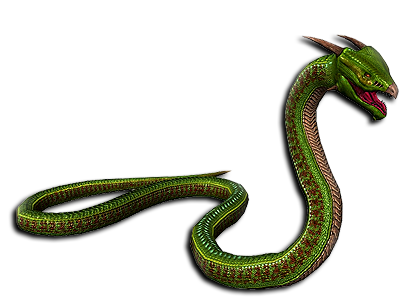 He sat still and listened for a moment. Nothing. Transferring the cans to his left hand he began picking up candy wrappers. There it was again, a soft scraping as if something were being dragged across the floor. It seemed to be coming from under the couch. He tilted his head, turning an ear toward the sound. Something brushed against his foot.

The cans slipped from his hand and clattered to the floor as Johnny jerked his feet up. He quickly slid over to the edge of the couch and slapped at a lamp on a small end table, filling the living room with yellow light and long shadows. There on the hardwood floor, sliding out from under the couch, was a large green snake. Its head was nearly the size of Johnny's own and its body was thicker than his arm with a reddish brown stripe running down the side. It moved over the floor, weaving between the cans, and turned to focus its black eyes on Johnny, who was now cowering on the end of the couch, looking as if he meant to sink into and become part of the cushions.

Johnny's greatest fear was of snakes. Any snakes really, even those pencil sized ones made his skin crawl, but this one was huge. It was easily seven or eight feet long, thick and powerful, and as it stared at him it flicked its tongue out like it was tasting him through the air. It pulled its body into tight curves, as if it was getting ready to strike or give chase.

Johnny looked around nervously, hoping for an escape route. Maybe he could jump over the back of the couch and make it to the bathroom or the kitchen ahead of the snake, race out the back door and trap the giant reptile inside. As he looked around the snake's head moved too, tracking him. He slowly gathered his feet under him, preparing to jump, but just then the couch raised up and bumped back to the floor with a loud thump. He nearly toppled over the edge, instead grasping the armrest for balance. His eyes widened as he looked down at the floor.

More snakes slithered out from under the couch, varied in color and smaller than the first one, but still large enough to make the hairs on the back of his neck stand straight as needles and the blood drain from his face. Dozens, no, hundreds of the things slipped from below him, their bodies twisting around and over each other. The floor was a sea of writhing scales.

He clawed his way back toward the center of the couch, but backed into something solid, large and cold. His head swiveled around slowly, mouth hanging agape, like a Halloween ghoul suspended from a stick.

It was on the couch with him now, that big green snake, all coiled up and waiting. It was much larger now too, maybe even twice the size. It smiled at him. Can snakes smile? Johnny didn't know, or care. He was far too busy screaming inside his own head, his body paralyzed, refusing to respond to his command to move, run, get the hell away from here. His heart crashed inside his chest like a freight train derailing.

“Hello Johnny,” the giant snake-thing hissed in a voice that sounded like... Jacqi?

“What?” Johnny gasped, the air rushing out of his lungs as the snake whipped forward, its thick body wrapping and curling around him. Scales bit into his arms and neck while the snake wrapped tighter, squeezing. He could hear his bones pop from their joints and begin to crack and snap. He was being compressed, reshaped, made meal sized. He turned his bulging eyes up toward the grinning head of the snake. The mouth split open, unhinging and growing wider, revealing rows of wickedly curved teeth. Whatever went into that mouth would not be getting back out, he realized as it descended toward him.

Johnny awoke with a start. The room was dark, all gray with shadow, and the house was silent. He sat up quickly on the couch, whipping his head from side to side as he scanned the floor. Darkness stretched into every corner, but nothing moved. He sighed with relief. That was one hell of a dream. He leaned forward and put his elbows on his knees, rubbing his eyes with the heels of his hands.

A sudden, sharp pain shot across the calf of his left leg. Instinctively he smacked at his calf with the palm of his hand. A lump fell away beneath the denim of his jeans, slipped down his leg and out under the cuff onto the floor. He quickly brought his foot up and stomped down on the thing, then slid sideways on the couch while reaching for the lamp. When the lamplight filled the room he saw it clearly, a big gold and brown speckled beetle with a pair of vicious pincers at its head. The pincers were red with blood. The bug turned around, mostly unhurt from Johnny's stomp, and clicked its mandibles menacingly.

Johnny pulled his feet up onto the couch, noting the blood running down the back of his leg and soaking into his sock. Here was another of his worst fears, a giant flesh eating bug. He remembered seeing one of those mummy movies where there had been a bunch of scarabs in it, and how it had given him nightmares for most of a week. This bug looked almost exactly like those. He watched the bug watch him while his blood dripped onto the couch cushion.

Another searing pain suddenly erupted from his side under his shirt. He cried out and slapped his hand onto his shirt, capturing another beetle which then bit through the shirt into Johnny's hand. He screamed and tried to throw the bug away from him when yet another bug sliced into his right arm. He jumped up from the couch, slapping and sweeping multiple beetles off him onto the floor. More bites landed on his legs, his buttocks and his back. Johnny spun in circles, bleeding freely and clawing at himself while the floor swarmed with beetles. He jumped and stomped, fighting a losing battle against the rising tide of bugs which bit into his legs, arms, neck and face. They went under his clothing to rip away chunks of his flesh, tearing and gorging until muscle separated from bone and Johnny fell to the floor, his eyes jerking from side to side while his heart hammered wildly, pumping the last of his blood into a pool around him.

Johnny awoke with a start. The room was softly lit with the glow of a shaded lamp in the corner. His girlfriend was kneeling on the floor in front of him, holding his right hand in hers. He sat up quickly, pulling his hand away. His clothes were soaked through with sweat and his heart was skipping along like a Maserati on the Autobahn. He carefully touched himself, his arms and chest, making certain he was still whole. Looking to the side he saw the beer cans and candy wrappers were gone, the couch and room were clean.

Jacqi stood up, drawing his attention back. She wore only her undergarments, which were of thin black lace. She looked slim, golden in the warm light, and exceptionally strong. He didn't recall her being this fit. She brought a knee up over his leg and onto the couch, straddling him.

“Hello Johnny,” she said, her mouth turned up in a slightly crooked smile.

“Oh Honey,” she cooed, tilting her head as she started unbuttoning his shirt. “I wouldn't let that bother you.” She spread open his shirt and bent down toward his chest. “Do you know how delicious you are?”

Jacqi licked Johnny's chest. Her tongue was long and thin, and forked at the tip into two sharp tails. She raised her face to look into his startled eyes. Her own eyes were glowing orange and flickering, as if lit from a candle. Her mouth split in a wide grin filled with long, sharp teeth, her tongue flicking past to lick over his shivering chest. She pushed him back and pinned him to the couch as he strained beneath her, gasping and heaving. He started to scream, but she quickly clamped a hand over his mouth, muffling him.

“Shh, now,” she smiled down at him with her burning eyes and black, gaping mouth, “the kiddies are sleeping.”

Jacqi reached into the black plastic bag and withdrew another gooey chunk. She placed it into the hole she had dug, tamping it down with her garden shovel. Wiping her hands on her apron she reached into a separate paper bag to withdraw several pumpkin seeds, which she also placed into the hole before covering it all up with fresh, wet soil. Shuffling over a couple feet she stuck her little shovel in the ground and started digging a new hole.

“Whatcha doing, Mommy?” Trenton said from the moonlit yard behind her. She turned her head and gave him a warm smile.

“Planting pumpkins,” she said lightly. “Here, want to come help?” She motioned him forward and put the shovel in his hands when he knelt in the dirt next to her. “You have to do it just right. It's very important.”

Jacqi guided her son's hand with her own, placing her other hand on the back of his neck. That hand radiated a soft reddish orange glow as some of her power flowed into him. He and his sister would learn and grow with her. They were family, after all.

She reached over and plopped another gooey piece from the plastic bag into the new hole.

Jacqi is all set to start her new life as the embodiment of the pumpkin queen, just her and her two kids. However there's the little problem of her live-in boyfriend to contend with, and he's already managed to piss her off.
This is Part 2 of a bonus continuation of This is Halloween.
You can jump to Part 1 by clicking Here.